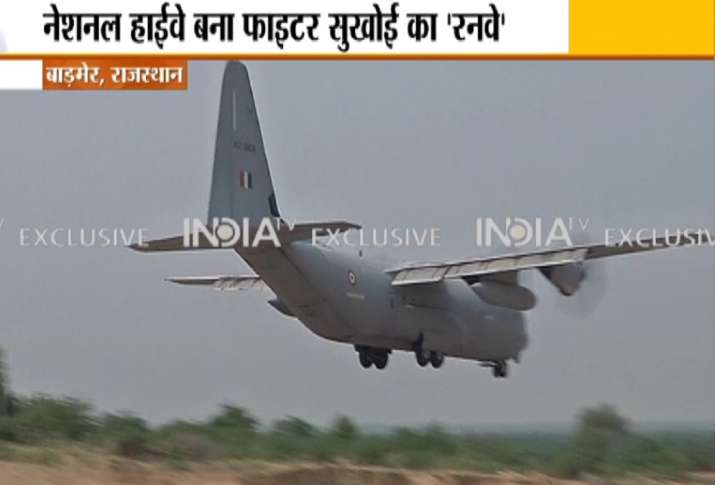 Emergency landing field to be inaugurated on National Road-925 in Barmer, Rajasthan

Union Ministers Rajnath Singh and Nitin Gadkari will inaugurate an emergency landing field on National Road-925 in the Gandhav Bhakasar section of Barmer, Rajasthan on Thursday. According to an official statement, the National Highways Authority of India (NHAI) has developed a 3 km section of the Satta-Gandhav section of the NH-925A, as an Emergency Landing Facility (ELF) for the Army of Indian air.

This facility is part of the newly developed two-lane paved shoulder of the Gagariya-Bakhasar and Satta-Gandhav section having a total length of 196.97 km and costing Rs 765.52 crore under the Bharatmala Pariyojana.

Meanwhile, several fighter jets landed on the national road-925 today, a day before the inauguration of the emergency landing field.

This project will improve connectivity between villages in Barmer and Jalore districts located on the international border, the statement said, adding that the section located in the western border area will facilitate the vigilance of the Indian army and strengthen the basic infrastructure of the country.

The statement further states that this is the first time that the national road will be used for an emergency landing by the Indian Air Force.

In addition to the emergency landing strip, 3 helipads (100 x 30 meters each) were built in the villages of Kundanpura, Singhania and Bakhasar as part of this project, according to the requirements of the air force. / Indian army, which will serve as a base for strengthening the Indian army and the security network at the country’s western international border.

The works were carried out by GHV India Pvt Ltd under the supervision of IAF and NHAI.

Read also | IAF plane with Rajnath and Gadkari to perform simulated emergency landing on the highway in Barmer, Rajasthan