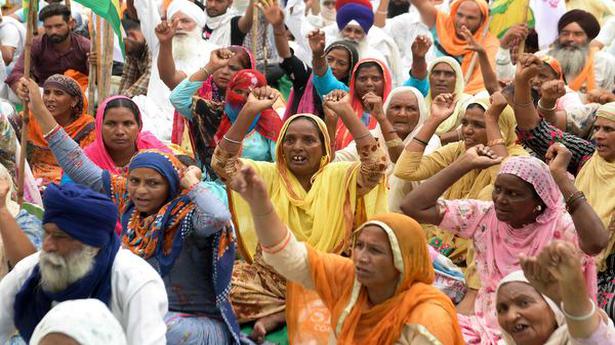 The Bhartiya Kisan (BKU) union claimed that the police used lathicharges to disperse the agitators.

The Bhartiya Kisan union and other farmers’ organizations on Thursday blocked the national road in Pipli, Kurukshetra district, Haryana, in protest against the Centre’s three agricultural ordinances, which they claimed were anti-farmers .

The Bhartiya Kisan (BKU) union claimed that the police used lathicharges to disperse the agitators.

Hundreds of farmers managed to reach Pipli Chowk and threw stones at the policemen guarding the barriers, a police officer said.

Farmers also smashed the windows of a fire engine parked at the site, he said.

Police used lathicharges to disperse the crowd, the officer said.

Later, the protesters sat on a dharna on National Road 22 to block traffic. Reports of blocked traffic by farmers on various other roads around Kurukshetra have reached here.

Previously, despite strict arrangements made by the district administration to prevent any farmer from reaching the Pipli grain market to participate in the “Kissan Bachao, Mandi Bachao” rally, many farmers managed to reach near the destination.

About 100 farmers riding their tractors and other vehicles broke the police barriers erected at the Dayalpur crossing in the town of Kurukshetra and headed for Pipli.

Farmer chief Akshay Hathira, who led the group, told media that the state government was trying to suppress farmers’ voices by banning the rally and imposing Section 144 prohibition orders. of the CrPC (prevents the gathering of five or more people in one place) in Pipli.

Meanwhile, Pipli Mandi and its surroundings were cordoned off by a large contingent of police.

Congress leader Ashok Arora and Ladwa Congressman Mewa Singh along with their supporters went outside the Pipli Mandi and sat on the road when police prevented them from crossing the barrier.

The BJP-led state government had asked the BKU not to hold the rally due to the coronavirus pandemic.

Kurukshetra’s administration also pasted a letter outside the residence of BKU Haryana chairman Gurnam Singh, warning him not to organize the rally.

However, Singh had said they would go ahead with the protest.

Notably, farmers in Haryana and Punjab protested against the Agricultural Trade and Trade (Promotion and Facilitation) Ordinance 2020, the Farmers’ Agreement (Empowerment and Protection) on Price Assurance and agricultural services, 2020, and the Essential Products Ordinance (Amendment) Ordinance, 2020.

Former chief minister Bhupinder Singh Hooda on Wednesday extended his support for the agitation against the ordinances, which he said aim to remove protection given to farmers.

Hooda, who is the leader of the opposition in Haryana, said in a statement that not only farmers, but also workers, commercial agents and small traders would also be affected.