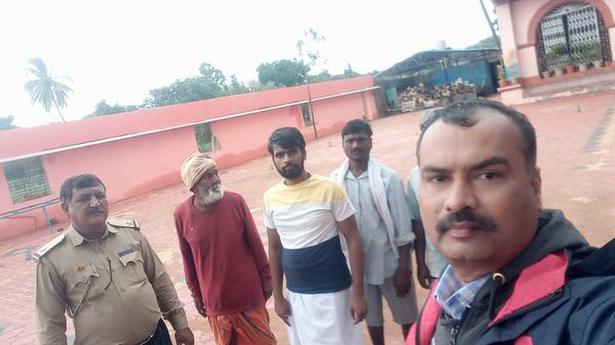 Parts of the Belagavi-Kolhapur National Road were closed due to heavy rains on July 23.

Police hijacked buses and other vehicles from the Yamagarani checkpoint after parts of the national road were flooded near Nippani.

Police Commissioner Lakshman Nimbaragi asked officers from Tumakuru, Chitradurga, Davangere, Haveri and Dharwad not to allow vehicles to travel to Maharashtra via Belagavi.

Police were stationed at checkpoints in Narendra, Hirebagewadi and Hattargi village.

Mr Nimbaragi said vehicles bound for Maharashtra and northern India were being diverted to the Hospet-Vijayapura and Hubballi-Vijayapura routes.

Motorists traveling to Maharashtra were told to take alternative routes by Karnataka police in Belagavi on the night of July 22.

Authorities issued a warning to farmers and fishermen on the banks of the Malaprabha, claiming that water from the Renuka Sagar dam in Belagavi district could be released at any time, as the retained water filled the reservoir at its capacity.

The water at the Renuka Sagar Dam stood at 2,069 feet against a capacity of 2,079 feet. Total retained water was approximately 28.42 tmcft against its capacity of 37.73 tmcft. The inflow exceeded 33,000 cusecs and the outflow could reach around 20,000 cusecs, officials said.

Meanwhile, Maharashtra opened the gates of the Koyna Dam to release around 20,000 cusecs of water into the Koyna River, a tributary of the Krishna River, which flows in northern Karnataka.

The discharge from the Koyna could reach 80,000 cusecs if heavy rains continued in the Konkan and Satara regions of Maharashtra, officials said.

The total influx into the Krishna at the interstate border was around 1.15 lakh cusec, officers said.

However, after adding an influx into the Krishna from other sources along the river, the inflow into the Narayanpur Dam in Yadgir district was around 1.72 lakh cusec. The flow was about 2.58 lakh cusecs.

About 150 homes were affected, officers said. The inhabitants of about fifteen houses in Peeranwadi in Belagavi left their houses and took refuge in the houses of relatives and friends.

A house belonging to Anjali Nimbalkar, Congressman from Khanapur, was flooded. She was not on the premises when water from the Malaprabha River entered the house, which is near Lakshmi’s land on the outskirts of town. Some of the security staff and domestic help, who were in the house, moved to a safer location.

A vaccination campaign at the Deccan Medical Center hospital was interrupted after rainwater entered the premises.

Several people rescued by the SDRF

Disaster Assistance Response Force (SDRF) personnel rescued at least six people affected by heavy rains or flooding. They rescued Sri Siddeshwar Swami and his associates who were stuck in the cabot’s premises in Kundaragi near Gokak.

SDRF staff rescued Ganapati Mithari, a fisherman who got stranded in a shed when the Pandari River entered the fields near Londa. Reshma Talikoti, tahsildar of Khanapur, contacted her counterpart and other officers from the neighboring district of Uttara Kannada. Forestry officers from Ganesh Gudi Adventure Camp called SDRF staff who used a boat to reach the location. They threw a rope towards Ganapati. He grabbed the rope and swam towards them.

SDRF staff and police rescued Bharmu Patil, a young farmer who had climbed a tree to escape the rising waters of the Markandeya River in the village of Waghawade.

Deputy Commissioner MG Hiremath said the district administration had opened five health centers in the taluks of Nippani and Sankeshwar to house people whose villages were flooded.

Jagadish Eeti, commissioner of the municipal council of the city of Sankeshwar, and Ganapati Kanganoli, deputy police inspector, have been engaged in the transfer of people to health centers. Access to Sri Shankarling Temple and Sri Mahalakshmi Temple in Sankeshwar has been cut off.

Following heavy rains across Karnataka, Chief Minister BS Yediyurappa on July 23 called on all district ministers and MPs to help those affected by the rains.

The Chief Minister tweeted: “I order all district ministers and deputies to be present in their respective districts and constituencies to oversee the rescue and relief efforts carried out by the district administrations.”

He told deputy commissioners of flood-affected districts to seek government support if needed to undertake rescue and relief measures.

“I spoke to DCs and reviewed the situation resulting from the relentless rains in several parts of the state. The state government will provide all necessary support for relief and rescue efforts, and help farmers who have suffered losses due to heavy rains and hailstorms, ”he tweeted.

Later, following the inspection of various development works undertaken in Bengaluru, Chief Minister BS Yeddiyurappa said: “I have been monitoring the situation by being in constant contact with them over the past four or five days. . There is no reason to be concerned at this time. If necessary, I will even have a video conference with them later. The respective district administrations are on high alert to prevent any loss of life and property, he said.

He said Deputy Chief Minister Govind Karjol, who is in northern Karnataka, had been tasked with monitoring the situation in the flood-affected areas until July 25. “We are ready to face any situation, with all the help given by Prime Minister Narendra Modi,” he said.

Following a rise in the water level in the Krishna River, the Chief Minister met with the Belagavi District Deputy Commissioner and ordered the official to move people and pets located on the banks of the river. the river to safer places.

On July 20, he had reviewed the situation in 13 districts and told deputy commissioners and directors general to take precautionary and relief measures.

On July 23, he asked the district officials of Kodagu, Ballari, Hassan, Udupi, Shivamogga, Uttara Kannada, Dakshina Kannada, Chikkamagaluru, Vijayapura, Kalaburagi, Mysuru, Koppal and Belagavi to use the funds available in their accounts to undertake relief work for those affected. by flooding.