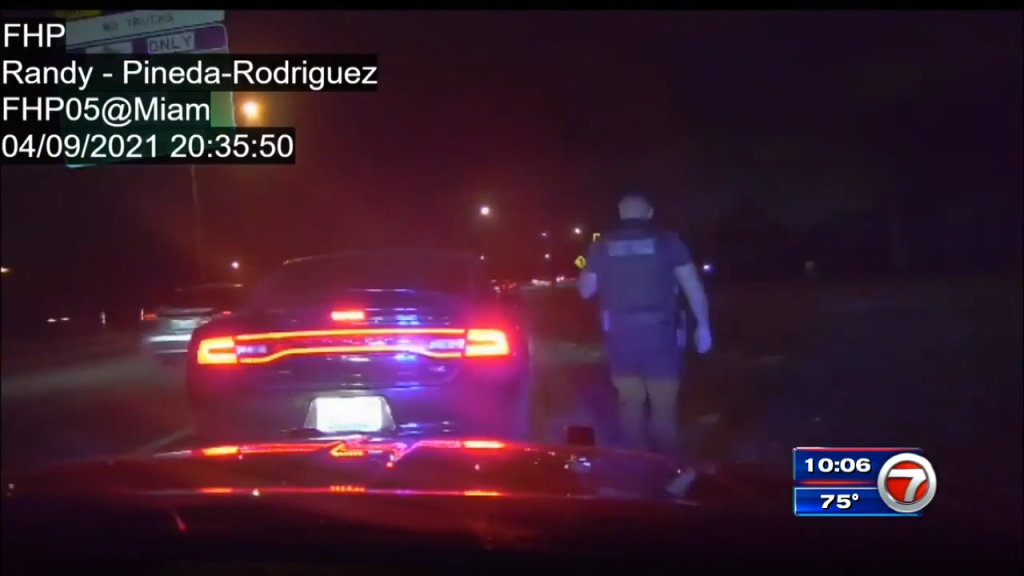 The chase occurred around 8:30 p.m. on April 9, when a Florida Highway Patrol soldier was heading south of I-95 in Miami-Dade County when he reported seeing a high speed car entering and exiting traffic.

Dashcam footage shows when he turned on his police lights. The driver of the Black Dodge Charger runs, stopping.

The soldier exited and stopped to chat with the driver through the passenger side window.

In his report, the soldier said the driver gave him an expired medical marijuana card and noticed a smell of marijuana and a bag containing a green leafy substance in the front passenger seat.

Less than a minute later, the parking lights changed and the driver accelerated.

The soldier ran to his cruiser to chase him and let the dispatcher know what was going on.

The rider followed on the shoulder, maneuvering around a tow truck.

The soldier saw the driver get off the freeway, but by the time he got to the exit ramp the only things that were visible were skid marks and a lot of smoke.

Within three minutes, the sirens sounded, then more soldiers arrived.

Screams were heard in the distance.

The driver, identified as 19-year-old Leonardo Raxach, crashed into a tree in the ditch and was taken to Aventura Hospital. Inside the car, soldiers said they found LSD, a Glock-style pistol and a fully loaded large caliber magazine.

According to the arrest, marijuana and ecstasy were also found in the vehicle.

Raxach faces charges of possession of marijuana, flight and escape from an officer, and trafficking in LSD.

Copyright 2021 Sunbeam Television Corp. All rights reserved. This material may not be published, broadcast, rewritten or redistributed.