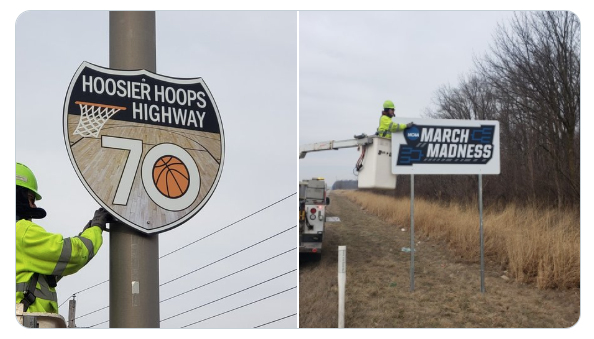 The Indiana Department of Transportation tweeted the image as workers put up NCAA signs along highways in Indiana. (Photo courtesy of INDOT)

The Indiana Department of Transportation began unveiling “Hoosier Hoops Highway” signs across the state ahead of the Big Ten, NCAA, and other basketball tournaments held in Indiana.

Games will be played across Indiana starting Wednesday in Evansville, Indianapolis, Bloomington and West Lafayette.

INDOT said on Tuesday it was placing temporary signs on highways leading to host cities to commemorate the historic month and help guide fans and teams.

Signs will be visible along the main roads serving the tournaments during the month of March.

The Ohio Valley Conference men’s and women’s tournaments kick off Wednesday at the Ford Center in Evansville.

Welcome to the Hoosier Hoops Highway! We dress our highways for @marchmadness. Be on the lookout for these new brands throughout the month, they are going up this week! More information: https://t.co/umaKiOT93c pic.twitter.com/B2pzV4z0ex