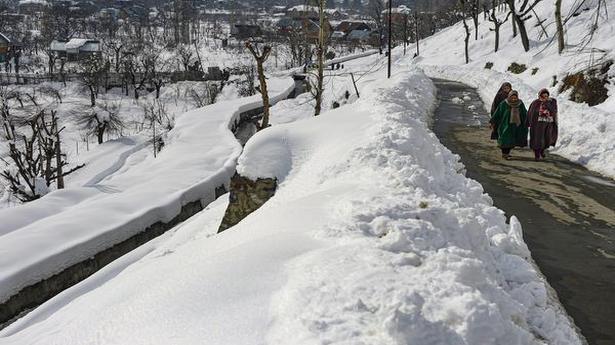 One-way traffic resumed Thursday on the Jammu-Srinagar National Highway after being suspended for the past two days due to snowfall and multiple landslides in the Ramban area, a service official said. the circulation. Highway traffic was cleared from Srinagar to Jammu this morning after the road was cleared of snow and landslide debris, he said.

The highway, the only all-weather road connecting Kashmir with the rest of the country, was closed to traffic on Tuesday following fresh snowfall and relentless rains, leaving thousands of commuters stranded.

The Jawahar Tunnel, the gateway to Kashmir, experienced nearly three feet of fresh snow on Tuesday, as relentless rains triggered multiple landslides and rock fire from the hills overlooking the highway between Panthiyal and Ramsu, forcing the arterial road to close.

A youth was killed on Wednesday when his vehicle fell under a landslide in Panthiyal.

In the Jammu region, the minimum temperature fell for the second day on Wednesday, settling several degrees below normal.

Jammu City recorded a low of 4.5 degrees C from the 6 degrees C the night before, down 2.5 notches from the season average, said a spokesperson for the office of the MeT.

The snow-capped town of Bhaderwah in Doda District was the coldest place on record in the region with a low of minus 2.5 degrees C, recording a drop of more than one degree, the spokesperson said.

The road towns of Batote and Banihal in Ramban also faltered in a sub-zero temperature of minus 1.5 and minus 0.2 degrees C respectively.

He said Katra, the base camp for pilgrims visiting Mata Vaishno Devi Shrine in Reasi District, recorded a nighttime temperature of 4.7 degrees Celsius.

Check out the best new road signs on GA Roads

Award of national highway contracts to be hit by expanding Bharatmala Phase I, study…

According to the National Highway Traffic Safety Administration, road deaths in the…