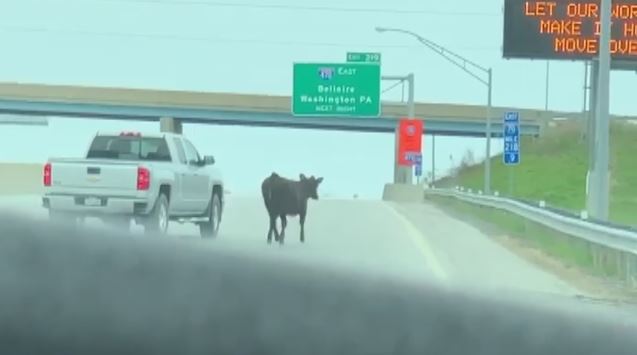 ST. CLAIRSVILLE, Ohio (WTRF) – The Ohio State Highway Patrol responded to reports on Saturday afternoon of a loose cow on I-70 in Belmont County.

Travelers captured videos of the rogue cattle on the highway before it was finally forced into a country road near the highway.

St. Clairsville Police Officer Greg Clark told our sister station WTRF that he received the call for the loose cow at around 1:30 p.m.

According to Agent Clark, the owners of the cow were moving her from their trailer to a buyer’s trailer near the St. Clairsville mall. It was then that the cow managed to slip away and rush down the highway.

Officials say it took a group effort between owners and patrollers to capture the animal.

Two officers were stationed along the road to watch in case the cow came back to traffic.

The large animal headed for a hill near a store where a patrol officer says he was eventually apprehended with a rope by the Belmont County Sheriff’s Department.

Witnesses say the cow does not appear to be injured. Officer Clark says he will be checked by a vet.

Officer Clark says he’s been trained to respond to a lot of things, but this is the first time he’s captured a cow on a highway.