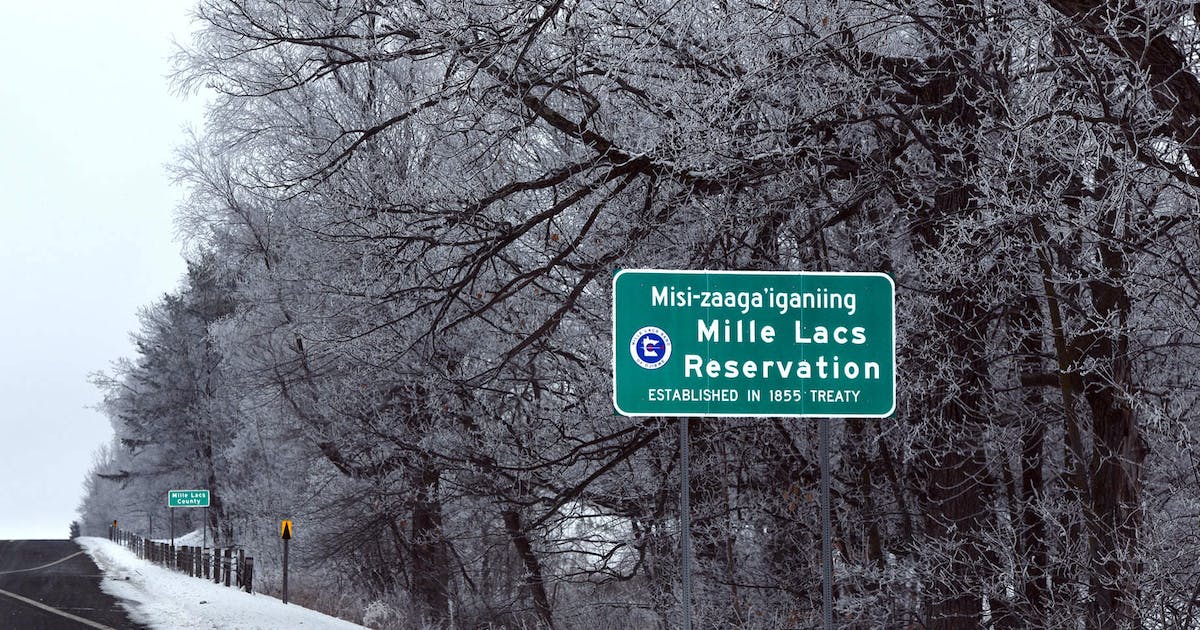 New road signs marking the boundary of the Mille Lacs Band of Ojibwe reserve were erected last month, but a protracted border dispute is far from over.

Teams from the Minnesota Department of Transportation put up signs on the road that read “Misi-zaaga’iganiing / Mille Lacs Reservation / Established in 1855 Treaty”. 169, 27 and 47 on the outer edges of the reserve as indicated in the treaty.

The signs come after Minnesota Attorney General Keith Ellison and Governor Tim Walz sided with the group last year in an opinion claiming he still owns 61,000 acres on the south shore of Mille Lacs Lake in central Minnesota.

In 2015, the US Department of the Interior’s Office of the Solicitor agreed, concluding that the reservation established by the 1855 treaty remained intact.

But Mille Lacs County officials say the 1855 treaty has long been dissolved and the reserve is much smaller, made up of about 4,000 acres of scattered land held in trust by the federal government.

The case is expected to be heard in federal court this spring.

The Bande des Mille Lacs is happy to see the signs, which remind us of the establishment of the reservation.

“Our ancestors resisted a decades-long campaign by powerful logging companies, non-Indian settlers, and federal, state and county officials to force them off the reservation,” the band said. wrote in a Facebook post on January 8. “Given our history and Mille Lacs County’s modern efforts to erase all memory of our reserve, we greatly appreciate the state’s public recognition for its creation in 1855.”

The county said the signs did not accurately mark the border and did not resolve the dispute.

“For over 100 years, it has been established by law – accepted by the county, state, federal government and even the band itself – that the Thousand Lakes reserve has been dissolved,” the Thousand Lakes County Administrator Pat Oman in a statement. “Now that the Band has sought to reopen this matter, it will be decided in federal courts and not by the placement of road signs by the Minnesota Department of Transportation.”

MnDOT is not part of the trial, spokesman Jake Loesch said.

“The Attorney General has clarified the state of Minnesota’s position on the reserve boundary for the Thousand Lakes Band,” Loesch said. “MnDOT will continue to use this limit, which is also in line with the federal government’s position.”

It is not uncommon for MnDOT to post signs at the borders of reserves. The agency has approximately 25 reservation kiosks statewide.

Some riders have noticed that Metro Transit has stopped selling its day pass and are wondering if it will be back.

Maybe, agency spokeswoman Laura Baenen said. Metro Transit will re-evaluate the pass offer when the pandemic is over and passengers return, she said.

The All-Day pass, which allowed unlimited day trips on local buses and light rail trains, was popular with fans heading to sporting events and concerts. In 2019, Metro Transit sold 705,000 of the passes.

With fewer public events due to COVID-19 and Metro Transit encouraging the use of public transportation for essential trips only, the agency has stopped selling the pass.

Passes previously purchased but not used remain valid. “We will honor them,” Baenen said.

Follow the latest traffic and travel news on The Drive at startribune.com. Have questions about traffic or transportation, or ideas for articles? Email [email protected], tweet @stribdrive, or call Tim Harlow at 612-673-7768.