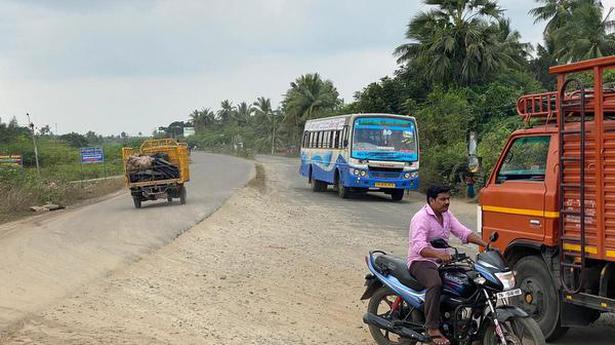 Seeking to break the deadlock in the widening of the Nagapattinam-Thanjavur section of national road 67, a delegation from the delta region informed the Union Minister of Road Transport and Highways of the pitiful state of the road.

The delegation, made up of representatives of the Tiruvarur Development Advisory Board, also urged the minister to take steps to make the road a four-lane highway as originally planned and speed up the project. Led by Mr. Selvaraj, MP for Nagapattinam, the delegation invited Minister Nitin Gadkari to New Delhi to brief him on the situation on the ground.

The unfinished works to widen the section of the Nagapattinam-Thanjavur highway have been a major irritant for residents of Nagapattinam, Tiruvarur and Thanjavur districts as well as for tourists visiting the region. The project, sanctioned at an estimated cost of 396 crore, to strengthen the road as a two-way highway with paved shoulders, has remained unfinished for several years now, despite several unrest from the population.

The poor condition of the road on several sections makes the journeys grueling for thousands of commuters and tourists.

The widening of this section to a total length of 78.53 km should have been completed by the end of 2017 itself. As the section is full of bends and intersecting waterways, widening the road is considered essential for improving road safety and controlling accidents.

“The Thanjavur-Nagapattinam road was originally intended to be transformed into a four-lane highway and the National Highways Authority of India even acquired the necessary land eight years ago. But the proposal was later changed as an extended two-lane road. Even this work is not finished, several years after the start of the work ”, declared S. Ravichandran, president; P.Senthil, secretary, and K. Arungandhi, treasurer, respectively, of the Tiruvarur Development Advisory Board, in the representation, conveying the fate of the inhabitants of the delta region.

Mr. Selvaraj, while approving the representations made by the council and various other organizations in the delta region, asked the minister to prioritize the resolution of the region’s grievances. In the absence of good road connectivity, large hospitals were reluctant to establish full-fledged facilities in the region, he argued.

If there had been good road connectivity, the region could also become a major religious tourist route in southern India, as important and historic temples, mosques and churches were located in the delta, a t -he declares.

Talk to The HinduMr Senthil said the minister granted them a patient hearing and promised affirmative action soon.